No matter what type of battery you're using, you want enough solar to make up for the amount of power you're taking out of your battery, or you will need a secondary method of charging.

Our advice is to install as much solar as you can fit and afford on your roof, but if the budget doesn't permit a splurge on solar panels, or if you just want to know if you're breaking even, this may help.

The question of how much energy you can harvest from your solar can get very complicated, factoring in the time of year, how much solar energy each part of Australia gets over the course of a year, the longitude and latitude of where you are. It's enough to make your head spin.

So we've come up with a method that we think is a bit simpler. It's not going to be accurate down to the last amp, but this will give you a way to work out how much solar you’re getting. First, let me explain some terminology we use for this formula (I've thrown in some example figures too), and then we'll look at how all that information can be put into a simple formula to calculate your solar harvest.

Taking these factors, the formula to calculate solar harvest looks like this:

A 100W panel in summer will give you:

That same panel in winter will give you:

Heat is not good for solar harvest

It's important to remember that the temperature of a solar panel is going to be significantly higher than the ambient air temperature, especially in Australia.

The chart below shows the drop in voltage from a solar panel at 25°C, which is standard test conditions. That drop occurs at approximately 18V and corresponds roughly to the Vmp of this particular panel. Note that the drop in voltage at 25°C will occur at a different voltage for your panel. 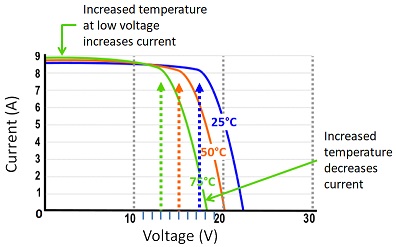 However, regardless of the size of a solar panel, current (amps) drops rapidly at a certain point, and that is the point we wish to make here. As the temperature of the panel increases, that drop in current occurs at a lower voltage the higher the temperature. If this particular panel shown in the graph above was at 75°C, the drop in current would be occurring at around 13V, and as you can see from the table of voltage requirements to charge various types of batteries, 13 volts isn't going to charge anything. 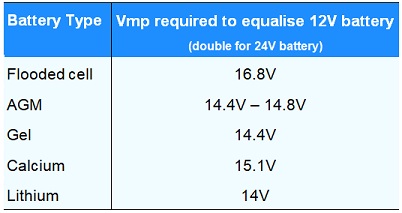 Calculating the effect of heat

You can use the following formulas to calculate how much power you will actually get out of a solar panel when it's operating at its maximum temperature.

A few words first about the numbers that are used. The Temperature coefficient of any particular panel can vary from 0.2% to 0.5% and I'm sure the information is declared for many panel manufacturers, but it's not commonly noted on an eBay advertisement. For the purpose of this demonstration, we'll use 0.3% to give an average scenario.

How to make the most of the solar panels you have, the huge impact that shadows have on your solar harvest, the importance of cleaning your panels and how to make that cleaning last.

You could test each solar panel by measuring the voltage at the back of each panel, but this is tricky. We go over a fairly easy way to test each individual solar panel and signs of a damaged panel.