Do you need an inverter?

If you don't run any 240VAC appliances, the simple answer is no.

If you only run 240VAC appliances when you're connected to mains power, such as at a caravan park, again, no you don't need an inverter.

But if you want the glamping lifestyle - air conditioning, coffee machine, electric blankets, air fryer, hair dryer and more - then yes, an inverter (or possibly even two) is the way to go.

How big does an inverter need to be?

This is basically a matter of adding up the number of watts each appliance uses that you are likely to run at the same time. If you're happy to turn off your air conditioner so that you can use your microwave, then you can get by with an inverter that will run the largest power consumer.

This is why you'll see inverters with two power readings - the lower is what the inverter can cope with for an extended time, the higher is what it can cope with for a very short amount of time to get an appliance up and running. That "short amount of time" varies between inverters - sometimes it's only a matter of milliseconds and is really a wasted attempt to make the inverter look better than it really is. Cheap inverters are the most common to use this false impression.

Some inverters even use the input power required and not the true continuous output.  We've seen some inverters on eBay that were listed as 2500W to 5000W and have been relisted as 3000W to 6000W.  These inverters struggle to hold the 2500W continuous - the 3000W is how much they will require coming in in order to put that 2500W out at 230VAC.

Larger inverters tend to use more power in standby mode than smaller inverters. However, a larger inverter is often needed to power items such as air conditioners and microwaves, particularly if you want to run multiple large draw items at once.

A solution we have implemented often is to install a small and a large inverter. The small one needs to have a low standby draw but enough capacity to run anything that needs to be on all the time or frequently during the day. For example, we would use a 375W inverter to power a modern 240VAC fridge and charge laptops and phones.

We recommend an inverter that uses 7 watts or less when in stand by - that's less than 0.6A on a 12V inverter. These inverters tend to be more expensive. If you're prepared to turn the inverter off when it's not in use, then you can get away with a cheaper inverter with a higher standby draw.

Generally the domain of larger inverters, they often are a mains charger as well. Some are even a solar controller and battery monitor, but these are physically large inverters and generally more suited to off-grid home installations. They also tend to be 24 or 48 volt.  If you have a large RV such as a bus, they're certainly worth considering.

If you want to run anything that has any sort of electronic components and displays, such as a laptop or a coffee machine, you must have a pure sinewave (PSW) inverter. 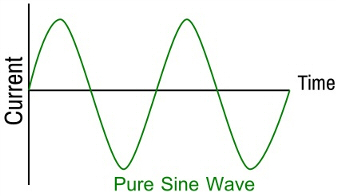 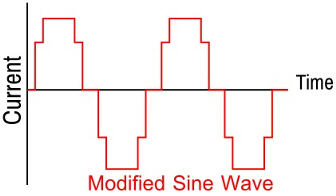 The 'jerkiness' of the steps damages electronics and induction motors such as digital televisions, laptops and modern refrigerators. It does not damage resistive loads as long as the load doesn't have electronics in it.

How can you tell if an appliance has a resistive load?

If the appliance has a twisty knob that just points to painted marks, such as on a washing machine that doesn't have a digital display, this is a rheostat type control and it can handle a modified sine wave inverter. So can an electric blanket with a basic click control (off, 1, 2 or 3). If an appliance has press buttons and/or a display, it can't take MSW and must have a pure sinewave inverter. If you're not sure, it's better to be safe than sorry - buy a PSW inverter.

The danger of using a modified sinewave inverter on anything with electronics is that it will damage the item you're trying to run from the inverter and most likely smoke will come out.

If an inverter is pure sine wave, it will say in its specifications that it is a PSW. If it doesn't specify either PSW or MSW, then you can be fairly confident that it is only a MSW.

As the voltage of the battery drops, the number of amps that the inverter has to handle increases. The low voltage battery shutdown point is to prevent damage to the inverter from trying to draw too many amps.

Ideally you want to replace the power you use from your battery with nice clean, free, solar power. If there isn’t enough solar available, DC to DC charging from your engine’s alternator or pushing some power in from a mains connection or via a generator are viable alternatives.